News reports on cancer don’t give the full story

Cancer stories seem to make the news on a daily basis.  For example, just today in the UK there are stories about a gene that could predispose non-smokers to lung cancer, how infertile men are at raised risk of prostate cancer, and how testing for the HPV virus during cervical screening doesn’t help pick up women who might go on to develop cervical cancer.

But it’s not just a case of “all publicity is good publicity.” Research published recently in Archives of Internal Medicine has shown that newspaper and magazine stories on cancer tend to focus on survival and aggressive treatments but steer clear of covering treatment failure, side effects of treatment, end of life care, and death.

The authors of this study looked at 436 500-word articles from top American newspapers and magazines, such as Chicago Tribune, New York Times, Newsweek, and Time. The 312 newspaper articles and 124 magazine pieces largely covered breast cancer (35.1%) and prostate cancer (14.9%), two of the most common types of cancer in the US.

Few articles (13.1%) pointed out that aggressive treatments such as chemotherapy can fail or that late stage cancer can be incurable. Moreover, less than a third highlighted the side effects associated with such treatments, like pain, hair loss, and nausea.

Only two articles (0.5%) exclusively covered palliative or hospice care for when treatment options had run out, whereas more than half (57.1%) instead focused solely on aggressive treatment.

Given that one in every two men and one in every three women in the US will be diagnosed with cancer in their lifetime, half of whom will die from their cancer or related complications, this optimistic skew in media reporting of cancer is somewhat misleading.

Cancer news coverage is known to affect the beliefs and behaviours of patients; for example, media coverage of mammography screening is known to increase the use of mammography in women. As such, “The tendency of the news to report on aggressive cancer treatments and survival but not on alternatives is also noteworthy given that unrealistic information may mislead the public about the trade-offs between attempts at heroic cures and hospice care,” say the authors.

Metal causes cancer, but iron prevents it. Courtesy of the Daily Mail.

Here’s a Friday funny for you: my friend put me onto a hilarious website called “Kill or cure“, which classifies inanimate objects on the basis of whether British newspaper the Daily Mail says they cause cancer or cure it.

Metal, according to the Daily Mail, causes cancer, but nobody panic, iron and zinc prevent it.

Nuts prevent cancer, but peanuts cause it.  Cod liver oil can give you cancer, but fish oils will protect you.  Are you still with me?!

Today medical journal The Lancet relaunched a sleek and efficient new version of their website TheLancet.com. 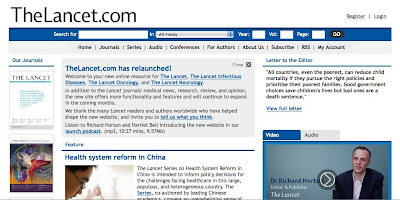 The team at The Lancet consulted 100 authors, readers, doctors and clinicians – or ‘development partners’ – to find out what users wanted, and the result is a much cleaner and easier to use website. In the new design, The Lancet journals The Lancet, The Lancet Infectious Diseases, The Lancet Oncology, and The Lancet Neurology are now all accessible and searchable from a single website.

In a special podcast to accompany the launch, the Editor-in-Chief Richard Horton outlines his favourite features:

“The most exciting things about The Lancet’s new site for me are first, we have the possibility for internet television … in the YouTube would that we live in I think that’s immensely important for communication, especially in health when you’ve got some pretty difficult concepts sometimes. And secondly, I think we’re also able to convey the personality of The Lancet in ways that we’ve never been able to before: the idea that we’re publishing research, educational material, and also opinion.”

The new video functionality is showcast TheLancet.com Story, a very flashy and professional-looking production in which members of the journal staff and Dr Anne Szarewski, clinical consultant at Cancer Research UK and one of the development partners, discuss what the new website means to them. The Lancet hopes that in the future users will be able to submit their own medical videos to the site.

Richard Horton boasts that the website has “the best search engine in medicine”, and certainly it’s an awful lot faster than the search on the previous incarnation. Importantly, the search results include not only results from The Lancet family of journals, but also all relevant results in Medline, a life sciences and biomedical publication database run by the US National Library of Medicine. 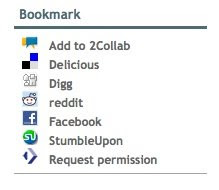 On the editorial side of things, original research articles now include drop-down Editors’ Notes within the table of contents – 2 or 3 sentences that summarize what is important about the research – while journal homepages feature three articles that represent the Editor’s choice. The news aspect of the website has been expanded with the inclusion of ‘This Week in Medicine’, short paragraph-long summaries of what has been going on in medicine worldwide. Specialty-based online collections comprising content from across The Lancet family of journals will launch in the near future, one mooted project being a cardiology portal.

I think the new version of TheLancet.com is a vast improvement on the previous website, not least because it is so much easier to navigate and doesn’t trip you up with sign-ins every 5 minutes. The site also looks far crisper, in stark contrast to it’s cluttered forebear. I’m more into text than multimedia so I’m not fussed about using the new video content, but it’s certainly very impressive and a new direction for The Lancet.

Irresponsible reporting of clinical trials by the news media

It is important for journalists to highlight any potential bias in medical research so that patients and physicians alike can judge how valid clinical trial findings are. Today the Journal of the American Medical Association published a study showing that almost half of news stories on clinical trials fail to report the funding source of the trial. In addition, two-thirds of news articles refer to study medications by their brand names instead of by their generic names.

The authors Hochman et al. reviewed papers published between 1st April 2004 and 30th April 2008 in the top five medical journals (New England Journal of Medicine, JAMA, the Lancet, Annals of Internal Medicine and Archives of Internal Medicine) to find pharmaceutical-company-funded studies that evaluated the efficacy or safety of medications. They then searched 45 major US newspapers (for example New York Times and USA Today) and 7 US-based primary news websites (including ABC News, CNN and MSNBC) for news stories that reported these clinical trials.

A total of 358 company-funded clinical trials were identified, and 117 of these yielded 306 distinct news stories. Of the 306 news stories, 42% did not report the funding source of the clinical study. A total of 277 of these news articles were about medications that had both brand names and generic names, but 67% of stories used brand names in at least half of the references to the medication and 38% used only brand names.

By using a brand name in news articles instead of a generic name, journalists are inadvertently favouring one pharmaceutical company over another. For example, the cholesterol lowering drug atorvastatin (generic name) is manufactured by several different pharmaceutical companies who all give it a different brand name – Pfizer call it Lipitor, whereas Merck until recently marketed a version called Zocor. Drugs are often referred to by their brand name because these titles tend to be better known – you’ve probably heard of paracetamol but not of acetaminophen; fair enough, maybe, but this practice still represents biased reporting.

It seems that news outlets think they are reporting funding sources in medical articles when actually they’re not. Academic journals have strict policies for disclosing funding and potential conflicts of interest, so why don’t newspapers follow suit?