A considerable proportion of women – between 25% and 53% in fact – suffer from sexual problems, with libido taking a nosedive after the menopause as estrogen levels drop. Although low libido isn’t a health problem per se, it has been shown to have a negative effect on sexual relationships and overall wellbeing. 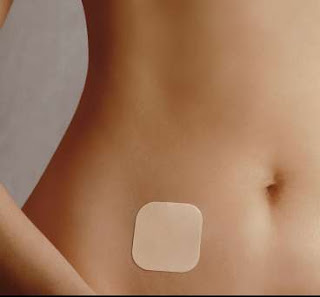 It has been known for several years that testosterone, administered as a skin patch, improves sexual function in postmenopausal women. Previous studies on sex drive in women have only looked at the effects of testosterone in females also taking estrogen therapy, as testosterone is thought to be ineffective without concurrent estrogen administration. Long-term estrogen therapy is, however, associated an increased risk of cardiovascular disease.

A recent study by Davis et al. has now shown that testosterone patches can improve libido in postmenopausal women taking no other hormone therapy. Sponsored by Procter & Gamble, the study found that use of the company’s Intrinsa testosterone patches doubled the number of satisfying sexual episodes a month in women with low libido.

The study – conducted at 65 centers in the US, Canada, Australia, the UK and Sweden – enrolled 814 women who had undergone natural or surgical (e.g. through hysterectomy) menopause and who were concerned about decreases in their levels of desire and sexual activity. These women were randomly assigned to receive daily placebo, 150 micrograms of testosterone a day or 300 micrograms of testosterone a day, which was administered via patches applied to the abdomen.

The number of reported side effects throughout the 52-week study period was similar in all three groups, although there was a higher incidence of unwanted hair growth in the women receiving 300 micrograms of testosterone a day. Four women receiving testosterone were diagnosed with breast cancer compared with none in the placebo group, but at least one case was thought to have developed before the initiation of testosterone therapy and the other cases were put down to chance.

Speaking to CNN, Dr Sheryl Kingsberg, one of the coauthors of the study, said, “Although the change in activity is modest, that’s something that is appropriate and I think most women would be more than happy with it. They wanted to return to the level of desire they had in their premenopausal years, and that’s what they got.”

World Diabetes Day is celebrated annually November 14th, the birthday of Frederick Banting, who in 1922, along with Charles Best, conceived the idea that led to the discovery of insulin.

The theme for this year and for 2007 is ‘Diabetes in Children and Adolescents’. The incidence of type 1 diabetes in children is increasing at a rate of 3% each year and is increasing fastest in preschool children (a rate of 5% per year). Type 2 diabetes has been reported in children as young as 8 years old. Over half of all children with diabetes develop complications – such as heart disease and blindness – within 15 years.

The World Diabetes Day 2007-2008 campaign aims to:
• Increase the number of children supported by the IDF Life for Child Program, a international aid endeavor that provides life-saving medication to children with diabetes in developing countries.
• Raise awareness of the warning signs of diabetes.
• Encourage initiatives to reduce diabetic ketoacidosis.
• Promote healthy lifestyles to help prevent type 2 diabetes in children.

One of the key events of is the lighting of buildings and monuments in blue – the colour of the diabetes circle. In 2008, the aim is to encourage a total of 500 monuments and iconic buildings to light up to mark World Diabetes Day. The owners of the London Eye have already pledged to light up their monument; the Sears Tower in Chicago, Niagara Falls on the US/Canada border and the Alamo in Texas are also going blue. You can see pictures of buildings that were lit up in 2007 on the IDF Flickr page.

The global diabetes community is organizing a range of activities, including radio and television programmes, public information meetings, poster and leaflet campaigns, newspaper and magazine articles, events for kids, and walks, runs, and bicycle races.

Members of the public encouraged to show their support of diabetes awareness by lighting blue World Diabetes candles; a percentage of the sales of these candles will go to support children with diabetes on the Life for a Child Program.

The World Diabetes Day website includes lists of activities in various cities worldwide, so check it out and get involved!

Diabetes gonna get you 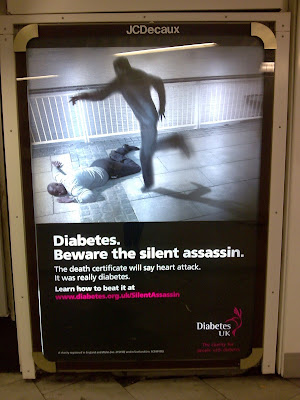 About 10 days ago Diabetes UK launched their biggest ever UK public awareness campaign – Beware the silent assassin. I first got wind of the campaign when I spotted this arresting poster at Old Street tube station in east London.

The campaign has been launched on the back of research by Mori showing that people tend to underestimate the severity of the complications associated with diabetes; for example, only 29% of adults are aware of the link between diabetes and heart disease, and only 46% appreciate that diabetes shortens life expectancy. Diabetes UK says, “This research tells us that the public see diabetes as rather mild and easily managed – something of an inconvenience rather than the serious condition it can be.”

In addition, an estimated 500,000 people in the UK have the condition but are not aware of it, so are at risk of being diagnosed too late to prevent the complications of diabetes. “Dealing with the diabetes time-bomb is a matter of urgency if we want to prevent millions of people from facing a grim future of ill-health,” said Douglas Smallwood, Chief Executive of Diabetes UK.

The ‘hard-hitting campaign’ launched by the charity aims to spook the public into realizing that diabetes is serious condition that can potentially cause heart disease, stroke, amputations, kidney failure and blindness.

The images, which will appear on outdoor posters as well as in newspapers and magazines, feature an ominous ghostly figure – the specter of undiagnosed diabetes presumably – pouncing on unsuspecting members of the public. The ads also include secondary warning messages such as:
– Diabetes causes more deaths than breast and prostate cancer combined.
– The death certificate will say heart attack. It was really diabetes.
– Diabetes causes heart disease, stroke, amputations, kidney failure and blindness.
So far so portentous.

The campaign also encourages people at risk of developing type 2 diabetes, i.e. the overweight, to make changes in their lifestyle to avoid a future of chronic disease. As the blurb states, “With early diagnosis and by leading a healthier lifestyle and improving diabetes control, the risk of developing these serious complications can be minimised. “

The adverts refer readers to a microsite developed especially for the campaign, which has quizzes to help users establish their risk of developing diabetes and gives information and support on managing the condition.

I personally feel that these adverts suggest that diabetes could to strike you dead on the spot – assassinate you – the way heart disease might, but is this really the case? On the other hand, a campaign educating our increasingly overweight population that diabetes is a serious and mostly preventable disease is certainly needed, and it is quite likely that striking adverts such as these will get people thinking more seriously about their health.