Would you like a defibrillator with your coke sir?

Authorities in Japan have taken an interesting approach to improving the dire survival rates after out-of-hospital sudden cardiac arrest (SCA), i.e. heart attack in the home or in a public place rather than in a ward on a hospital.

Nature Clinical Practice Cardiovascular Medicine reports that automated external defibrillator devices (AEDs) are being placed in vending machines and advertising hoardings in public spaces in Japan. Members of the public can then use these devices to provide defibrillation at the scene of a SCA, saving precious minutes before emergency services arrive. 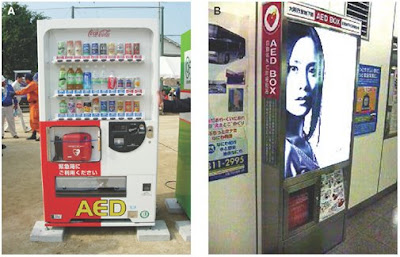 The American Heart Association estimates that 166,200 people die in the United States each year from out-of-hospital SCA and only 6.4% of patients who are admitted to hospital for SCA survive until discharge.

Early medical response is crucial for people who suffer an out-of-hospital SCA. For every minute that passes between collapse and defibrillation, survival from witnessed SCA falls by 7-10%. In most cases it is the emergency services who provide defibrillation, but time is lost waiting for paramedics to arrive at the scene.

An obvious way to shorten the time between SCA and defibrillation is for lay witnesses to perform the procedure. In fact, studies have found that defibrillation by members of the public considerably improves survival after SCA.

The Japanese government authorized the lay use of AEDs in July 2004. Subsequently, a study by the Japanese Fire and Disaster Management Agency in 2006 found that 32.1% of the 140 SCA victims who were defibrillated by a member of the public were still alive at 1 month, compared with 8.3% of the 18,180 people who did not receive defibrillation from a lay person.

In most countries public-access AEDs can only be used by trained individuals, be they members of the public, first aiders, paramedics and so on; however, what is interesting in Japan is that no training is necessary in order to use these devices. In addition, the Japanese government has formally declared that the liability of an individual who uses an AED is limited, irrespective of the outcome of resuscitative efforts.

Another interesting point about public-access AEDs in Japan is that rather than being directed by the government, the positioning of AEDs in public places is being spearheaded by commercial companies. As Nature Clinical Practice Cardiovascular Medicine reports:

“The cost of keeping an AED in a vending machine is primarily covered by the revenue from drink purchases and is shared by the manufacturer of the drink, the provider of the machine, the distributor of the AED, and the proprietor who provides the space and electricity. Allowing paid advertising on a display panel above a box housing an AED is another method of funding public access AEDs. Again, the proprietor has only to provide the space and electricity. These creative efforts are surely effective in keeping down AED dissemination costs.”

Although Japan was a little behind other countries when it came to introducing public-access AEDs, the creative approaches to accessibility undertaken by the Japanese are in a class of their own.

Here it is, your heart

Reducing dietary salt by half a teaspoon could save 92,000 lives a year