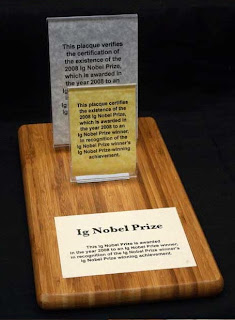 On Thursday the Ig Nobel prizes were awarded at Harvard University. Sponsored by the Annals of Improbable Research, these prizes are an irreverent alternative to the Nobel Prizes, which will be awarded over the next ten days, and aim to “celebrate the unusual, honor the imaginative — and spur people’s interest in science, medicine, and technology”.

This year the winners of the medicine prize were Dan Ariely of Duke University, Rebecca L Waber of MIT, Baba Shiv of Stanford University, and Ziv Carmon of INSEAD (Singapore), who demonstrated that high-priced placebos are more effective than low-priced placebos.

Rather than being frivolous, this study sounds like it may be of some importance. Patients switching from expensive branded medications to generic drugs have a tendency to perceive that the generic equivalents are less effective, and some might actually experience reduced efficacy thanks to a negative placebo effect (or nocebo response). Healthcare providers could, therefore, incur unnecessary costs by keeping patients on brand drugs on the basis of perceived efficacy. Doctors could prevent this problem by playing down potentially deleterious commercial factors when discussing treatment options with their patients; for example, steering clear of terms like ‘low-priced’ and ‘generic’.

To be fair, the overarching aim of the Ig Nobels Prizes is to “honor achievements that first make people laugh, and then make them think”. The study by Ariely et al. certainly meets both criteria, as do several of the winning pieces of research.

Read more: Nature News has a blow-by-blow account of the raucous ceremony, while The Guardian celebrates Britain’s double win.