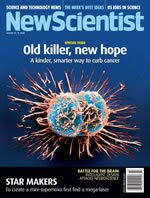 The main focus of the issue is a large article on genomics – ‘Living with the enemy‘. Instead of classifying tumors according to where in the body they appear, for example the prostate or the lung, scientists are now starting to groups cancers according to which molecular pathway the cancer uses in order to grow and spread.

New targeted therapies can act specifically on a particular molecular pathway, sparing the normal dividing cells that are often killed off in conventional forms of cancer therapy. For example, breast cancer patients with mutations that cause overproduction of the protein HER2 can be treated specifically with with an antibody called trastuzumab, better known as Herceptin, whereas those with receptors to the hormone estrogen can be treated with a drug called tamoxifen. An interactive graphic shows how these modern therapies work.

‘Patients doing it for themselves‘ describes how powerful, well-funded patient groups are setting the agenda for cancer research. The article cites the example of the Multiple Myeloma Research Foundation, which amazingly donates as much money to research on multiple myeloma as the US National Cancer Institute.

The capacity of the immune system to hold tumors dormant is discussed in ‘Tumors under lock and key‘. Apparently about a third of breast cancer survivors still have tumor cells circulating in their blood after successful treatment, in cases up to 22 years after therapy. Finding out how the immune system keeps microtumors, which are thought to be responsible for these circulating tumor cells, from running amok could provide new strategies for fighting cancer.

The special issue also contains a list of expert tips for evading cancer and an editorial lamenting how patients and healthcare providers are ever going to be able to afford these fancy new treatments.

All these articles are currently available online for free, so go check them out.

Viagra could help women too, but not how you think…