Today I went to see the Hadrian: Empire and Conflict exhibition at the British Museum, which “explores the life, love and legacy of Rome’s most enigmatic emperor”. The exhibition was fascinating, providing all sorts of detail about how the Roman empire was run and some fascinating perspectives on ancient culture.

One particularly interesting poster noted that the detailed and naturalistic statues of Hadrian in the exhibition always feature a diagonal crease in both earlobes – a tell-tale sign that the great emperor might have suffered from coronary artery disease. 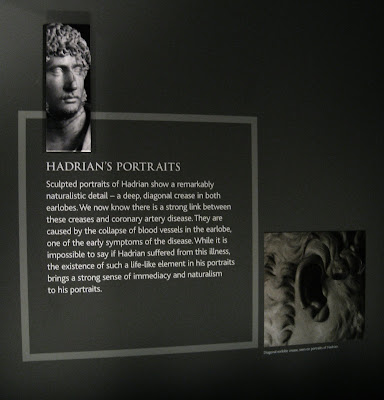 For over 20 years, researchers have noted an association between bilateral diagonal earlobe creases and coronary artery disease. There is controversy, however, as to whether the presence of these creases genuinely reflects a higher risk of heart disease.

A recent study in the journal Atherosclerosis found that the presence of diagonal earlobe creases correlated with the thickness of the intimal and medial layers that line blood vessels. Intima-media thickness reflects the build up of plaques in arteries, which causes ‘furring’ and narrowing of vessels and increases the risk of heart attack. In addition, a 2006 study that examined 520 cadavers undergoing forensic autopsy and a 2004 study of 415 patients both found that diagonal earlobe creases correlated with coronary artery disease.

On the other hand, Jorde et al. found that the prevalence of various risk factors associated with heart disease was the same in individuals with earlobe creases and in those without, although the authors noted that the creases were more common in older individuals. Similarly, Brady et al. concluded that the association between earlobe creases and coronary artery disease was down to the fact that the prevalence of both conditions increases with age.

Despite these studies, the majority of the literature on this subject does seem to agree that earlobe creases are a sign of heart disease.

Thanks to modern research, this otherwise innocuous detail recorded by the dedicated sculptors of ancient Rome is able to give us fascinating insight into the physical health of Hadrian, and also suggests that humans living thousands of years ago suffered the same illnesses as we do now. As the poster in the British Museum points out, we may never know whether Hadrian had coronary artery disease, but the intricate craftsmanship in the statues of this great emperor provide a tantalizing hint of what might have finally seen him off.

Winter getting you down? It might also be making you unhealthy