Are physician education programmes about to break free from the shackles of Big Pharma?

There’s a lot of interesting chatter around at the moment about pharmaceutical industry funding of Continuing Medical Education (CME) for physicians.

Qualified doctors are expected to keep up to date with the latest research and treatments in their field by completing educational activities, which generally take the form of quizzes that participants must complete having watched a video, read an article, attended a lecture and so on. In the US, the Accreditation Council for Continuing Medical Education awards credits for CME activities that are necessary in many states for physicians to maintain their licence to practice year on year.

CME activities are generally developed and peer reviewed by leaders in their field, and are often delivered online or in print free of charge. And this is where pharmaceutical industry funding and accusations of bias come in to the issue. It stands to reason that a pharmaceutical company wouldn’t bother funding a CME programme for a therapeutic area that they are not active in, and it’s also not unlikely that such programmes might overplay the benefits of a drug made by the sponsor over those made by their competitors.

And so to the great CME funding debacle of 2008. Earlier this year, pharmaceutical giant Pfizer declared that it would stop funding CME programs made by medical communications companies, although, interestingly, would continue to fund those run by not-for-profit groups.

Now Stanford University in California has now pledged to stop direct industry funding of CME, although Memorial Sloan Kettering Cancer Center in New York has been doing without since January last year.

All this news has got commentators sounding the death knell for industry-sponsored CME, with the British Medical Journal declaring the end of the free lunch for doctors while others more portentously state that 2008 could herald the end of CME as we know it.

So could these events be the birth pains of a new area of untainted CME? Let’s hand it to the doctors, one group who have a lot to win or lose in this argument. After all, a big feature recently published in the Journal of the American Medical Association on the long association between the pharmaceutical industry and CME programmes lays the blame for industry involvement squarely on physicians.

US physician and blogger David Toub in Pennsylvania suggests that CME might eventually become completely disentangled from the pharmaceutical industry once companies are unable to directly promote their products, although doctors may well end up having to pay for CME activities. Similarly, Dr Carlat in Massachusetts has been blogging on the issue of industry funded CME for quite some time and is firmly of the opinion that such funding “leads to many bad things, including biased education, corrupt physicians, and, ultimately, harm to our patients”.

Dr RW Donnell in Arkansas, on the other hand, states that “the inquisition against industry supported CME is knee-jerk and intellectually lazy”, and believes that CME programmes are inherently going to have some degree of bias thanks to the experiences and opinions of the doctors who develop them, whereas actual commercial bias is thin on the ground.

This issue has raged at conferences and online for a very long time and is due some sort of resolution, although whether 2008 is the year for closure depends on how pharmaceutical companies and CME providers react to all the heat. Better keep an eye on those news stories…

This isn’t a guide on how to read a clinical paper – you should have a look at Prof Trisha Greenhalgh‘s book ‘How to read a paper‘ or the extracts published in the BMJ way back in 1997 in you need tips on that front. Rather, the NCP Cardiovascular Medicine review examines different study designs, and interestingly puts forward a case for observational trials, as compared with randomized controlled trials.

Randomization – in which patients are allocated to treatment or no treatment (or placebo) in an entirely indiscriminate manner, thus distributing both known and unknown confounders between groups – and control or placebo groups – which comprise patients who do not receive the intervention – are the benchmarks of a good clinical study, allowing an investigator to isolate the effect of a treatment from various confounding factors.

However, the NCP review argues:

“The results of observational studies are often dismissed in favor of prospective randomized studies because of the widely recognized biases inherent in observational studies. Yet such studies form the basis of much of the medical knowledge we have today. Accordingly, rather than dismiss information gained from observational studies, it is more appropriate to recognize these biases and their effect on results, and to modify interpretation appropriately. Indeed, from a practical standpoint, all studies sustain some form of bias, either implicitly or explicitly.”

In addition, the authors state:

“Strict inclusion and exclusion criteria mean that the results of randomized studies might not be as applicable to general populations as are findings from observational studies, including both clinical registries and retrospective reviews”

The take-home message of the article is that practicing clinicans should analyze the patient population of a trial carefully before applying the findings to a patients of theirs.

This paper also discusses statistical power and the use of surrogate and composite end points, the validity (or not) of post hoc analysis, and the utility of peer review for spotting trial-design pitfalls. But obviously I’m more interested in the iconoclastic view of randomized controlled trials… 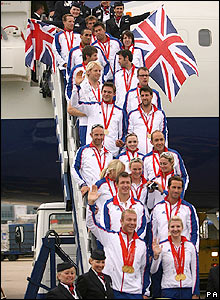 I have thoroughly enjoyed watching the Olympics this summer. Of course, this is due in no small part to Great Britain’s success, coming fourth in the medal table – the highest for 100 years.

As well as being glued to the cycling, I’ve also been fascinated by the medical and science stories this two-week celebration of human performance has thrown up.
For example, did you know that American man-machine Michael Phelps might have subclinical Marfan syndrome, a nasty connective tissue disorder that could be responsible for his giant armspan? Or that a high prevalence of gene mutation that affects the performance of fast-twitch muscles could have helped the Jamaicans clean up in the sprinting events?
How about the suggestion that the high number of world records broken in swimming at this Olympics could be thanks to the depth and breadth of the pool at the Bejing Water Cube? Or that the records broken on track and field are because athletes have trained to use oxygen more efficiently? And it seems that we’ll never know how old the Chinese gymnasts are thanks to the lack of biomarkers to accurately identify age, although the clever hacking that caught them out in the first place is certainly pretty damning.

Although only five athletes were disqualified this time, sadly doping is still going on at the games, but the methods – and ways of catching the cheats – are becoming more complicated, including microdosing techniques and possibly elaborate genetic and growth factor approaches in the future.

So congratulations to Beijing for hosting a successful games and to the athletes for for showing us what the human body is truly capable of.

Coming soon to a pharmacy near you – HELENITOL!

Pharmaceutical company drug adverts can be so cheesy or so bizarre, hence they lend themselves very well to spoofs and satire.

In the wake of the hilarious online drug name generators (Drug-O-Matic, The Prescription Drug Name Generator and The New Drug Generator to name a few), a website to generate an advert for your own imaginary drug has now been launched by CEDRA Clinical Research.
Here’s my effort: 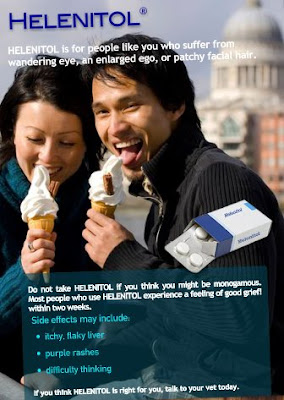 This is actually a lot of fun: you get to pick various comedy symptoms, for example “smelly feet” or “cooking deficiencies”, add a few adjectives and exclamations and hey presto, your miracle drug! The website for this enterprise – getyourdrugon.com – is pretty slick too, although I can’t say any of this marketing effort makes me want to sign up for clinical trials!
(Scienceroll actually beat me to this…)
Continue Reading

Fertility and reproduction, Pregnancy and babies

IVF does not increase the risk of complications at birth

Studies generally report a higher risk of complications at birth for babies conceived by IVF than for those conceived naturally. Women who undergo fertility treatment are far more likely to have twins or triplets than are women who conceive naturally thanks to the high number of embryos implanted, so a considerable proportion of the risks associated with IVF are in fact complications relating to multiple births.

However, the risks of complications before, during and after birth are still higher in women who conceive only a single child when undergoing assisted reproduction. For example, a meta-analysis published in the BMJ in 2007 found that singleton babies conceived with assisted reproduction were at least twice as likely to be born prematurely as babies conceived naturally, and one and a half times more likely to be born by cesarean section.

The authors came to this conclusion by assessing 2,500 women who had given birth to at least one child who had been conceived naturally and one who had been conceived using assisted fertilization. Among these siblings, the risk of premature delivery and of small size for gestational age were not significantly higher in those conceived by assisted reproduction than in those conceived naturally. The authors suggest that the poor perinatal outcomes reported in women who conceive using IVF might not be the fault of the assisted reproduction techniques and instead might be attributable to maternal factors, such as underlying infertility.

This study is particularly interesting because researchers investigating outcomes after assisted reproduction find it hard to untangle the possible negative effects of IVF technology from other factors that might adversely affect birth outcomes. The women who use IVF tend to do so because they’re having fertility problems, making them – and their birth outcomes – inherently different to women who conceive naturally.

Romundstad et al. controlled for such maternal factors by comparing IVF and natural conceived births in the same women, rather than births in two completely separate populations,. The births in either group had the same maternal baseline characteristics, so the authors were able discern the effect of IVF.

Welcome to my blog

Hello and welcome to In Sickness and In Health.

My name is Helen Jaques and I’m a medical writer and copy editor based in London, UK. My main interest is in clinical medicine, particularly evidence-based medicine and clinical practice. I plan to blog about interesting clinical trials I spot in the primary literature and give my take on medical and health stories in the mainstream press.

I hope this gives you some sort of idea what to expect. You can get a look what sort of thing I’m likely to blog about by having a look at my bookmarks on Connotea.

I hope you enjoy my blog and I look forward to reading your comments!